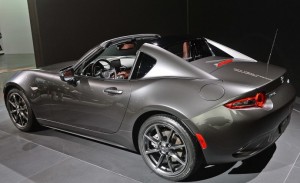 In what has remained the most surprising announcement at the New York International Auto Show, Mazda took the wraps off the MX-5 RF. While it approaches Jag F- Type levels of good looking, it has ignited the time honored debate: is the MX-5 actually a full-on sports car? And, in the bigger picture, can a convertible or roadster ever be a true sports car? Time to spark some friendship-ending water cooler debates. Let’s get started….

It’s pretty hard to argue that a two seater, 2,300 lb., ultra-low center of gravity machine isn’t a sports car. After all, those are Lotus Elise type numbers. However, with only 155 hp pushing the rear wheels and a plethora of body roll, some argue that the MX-5, and possibly all open top cars, aren’t true sports machines. Turns out, there’s actually some sound logic to back up that kind of thinking. 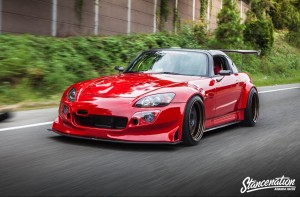 Time for very high level engineering. A car is basically connected at two major points: the roof and floor. Once you remove the roof, rigidity goes out the window. This explains why the Saab 9-3 is one of the worst handling convertibles you’re likely to find. Weirdly, fabric roof Aston Martins had that same problem up until very recently. To correct that floppiness, additional strength needs to be added to the floor and door sills. As a result, weight goes up and the fun factor goes down. Thus the thinking goes: if you add weight only for open air goodness, you’re not in a pure sports car.

To an extent, we agree. Sorry, Sebring, Cavalier and Sunfire owners, removing the roof contributes nothing to a sporty appeal. However, there are cases where removing the roof makes so little difference it’s actually a positive. The best example of all time: the Pagani Zonda F Roadster. Thanks to science fiction materials like carbo-tanium, the Zonda F was so rigid as a coupe, that removing the roof made no measurable difference in body stiffness. Instead, it left the driver’s ears with nowhere to run from that glorious AMG V12 lurking behind. 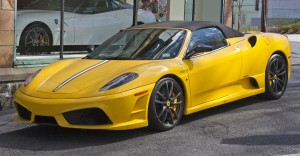 Nearly the same goes for the Ferrari F430 16M. In essence a roadster version of the Scuderia, tearing the roof off an ultra-hardcore Ferrari track special seems like sacrilege. Yet, even Ferrari’s test drivers state that the handling difference is so incredibly minimal, you’d have to be right at 10/10ths limits with Formula 1 instincts to even notice. Not bad when you consider the trade off is an open top Ferrari with one of the best sounding production engines ever made.

So we’ve proven that outrageously expensive and rare supercar drop tops can be sports cars. Not exactly earth shattering. But what about cars that us mere mortals can acquire? Generally speaking, cars designed from the first drawings to be roadsters generally have the best bones. A few classic examples include the S2000, Z4, F-Type, Boxter, etc. Coming full circle, does that list include the MX-5? In our opinion, without question. 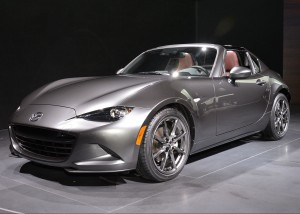 It’s the best selling roadster of all time and that’s for pretty good reason. Yes, there is a ton of body roll, but once you drive through it, the MX-5 will stick through corners without hesitation. Plus, since the Miata now has electric steering, the chassis movement does an admirable job of conveying what the car is currently doing. Again, there’s a reason these are track day favorites. They’re endlessly toss-able, easy to drive and maniacally fun. Seems like a solid sports car recipe. We’ll have three.