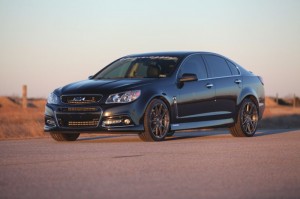 There is very little to not like about the Chevy SS. A genuinely good looking sedan, powerful yet under-the-radar, with a potent small-block V8 under the hood developing 415 hp and identical torque. In fact, the only criticism was that a manual transmission was not offered. Realizing the demand for a traditional ‘box, Chevy quickly announced a third pedal would be added. It sounds like a done deal. However, as great as 415 hp is, for the power hungry it falls a little short. That becomes particularly true in light of the Dodge Charger’s 470 ponies. To inject a little extra performance, Hennessey Performance has introduced a series of upgrades. Of course, by a little extra, we mean upwards of 1,000 horsepower.

Even for a company known for blistering speed, bringing power to the ten-century mark in a family sedan is staggering. Several stages are offered in case you aren’t looking for world-turning torque. The entry-level package, called the HPE475, brings up the 6.2-liter LS3 V8 up to, you guessed it, 475 hp. In total, six packages are available ranging from 475 to the incredible 1,000 hp option. In terms of what that power actually means, even the mid-pack HPE600 will bring your SS into the 11.84 second 1/4 mile at 117 mph. Not bad. Although the top figures have yet to be tested, we can imagine how devastating the numbers will become.

For those curious about how you massage four-figure power numbers out of a 6.2-liter V8, the short answer is that you don’t. Instead, Hennessey upped displacement to 7.0-liters and then added two turbochargers. While the HPE1000 SS comes standard with a manual transmission, for a little extra you can have it with an auto.