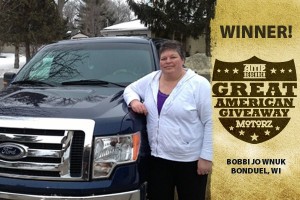 San Diego, Calif. – April 2, 2013 – Earlier this year, Motorz teamed up with AMP Research to introduce a very special contest called The AMP Research Great American Giveaway. Through this unique contest launched on February 1, entrants were asked to provide information about an exemplary American who owns a pickup truck and goes the extra mile to serve family, friends, community and/or country for a chance to win an AMP Research PowerStep™ system, and a choice of one of three other eligible products from AMP Research. The winner of the first contest is Bobbi Jo Wnuk of Bonduel, Wisconsin who will receive the AMP Research PowerStep system and the BedXtender HD™. 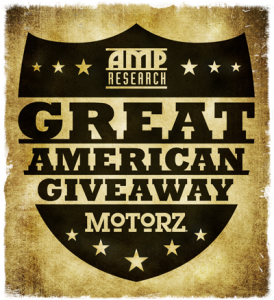 Ms. Wnuk, entered by her nephew Jason Heinz, drives a 2009 Ford F-150 and does a great deal to help the Special Education Department at the Wisconsin Bonduel School District. She also helps with homecare for the elderly and the disabled in the community, heads up a benefit for a neighbor fighting cancer, and serves as a volunteer with Bridge The Gap for Autism and the Autism Society of Northeast Wisconsin (both non-profits). Along the way, she puts her F-150 through some rough Wisconsin driving conditions.

“We received so many excellent entries that it was very tough for us to choose just one winner,” stated Mark Wronski, marketing director, AMP Research. “Bobbi’s entry stood out because of the extensive volunteer work she does, the way she uses her truck, and the benefits the AMP Research products can provide in making her life and her volunteer work a little bit easier. Bobbi is truly a great American, and we are thrilled to be able to award her this prize package.”

“This contest was developed to improve the lives of truck owners that help others,” stated Chris Duke, host and executive producer, Motorz. “We want to thank the people who make a difference, to recognize them and support the good work they are doing.”

Sponsored by Craftsman® at Sears® and many more, Motorz is now the fastest growing nationally televised DIY Automotive Improvement® series. Professionally produced in a home garage environment, Motorz shows viewers how to confidently maintain a vehicle and install aftermarket accessories with step-by-step instructions in an entertaining family friendly format. Now completing its fifth season, Motorz reaches nearly 80 million television households in the U.S. via cable and satellite television channels, and many more via Internet, video-on-demand, and mobile access viewing options. http://www.motorz.tv/distribution  For more information about Motorz or to watch the show, visit http://www.motorz.tv. LIKE Motorz on Facebook at http://www.facebook.com/motorztv, follow on Twitter @motorz, or view on YouTube at http://www.youtube.com/motorztv.