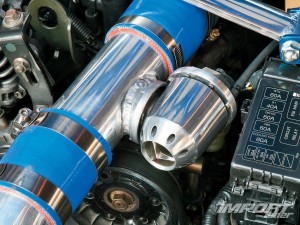 As automakers work to make cars increasingly fuel efficient, turbochargers are becoming much more common. Whether you’re looking to add a little more drama to your turbo or are planning a full-on build, blow-off valves should enter the equation. What exactly are blow-off valves and when do you need to go aftermarket? Read on…

Since the idea of a turbocharger is to compress air at varying levels, the system is operating under fluctuating pressures. When you’re on the throttle and the turbo has enough time to spool up, the PSI of air in the system rises significantly. Let off the gas quickly and all of that air has to go somewhere. Worst case scenario: it runs into a closed throttle plate and backtracks to the turbo. This is known as compressor surge and adds a huge amount of stress to the turbo and surrounding components.

To prevent this potentially damaging occurrence, most turbocharged cars use blow-off valves (BOV). As the name implies, these valves allow compressed air to escape when the throttle is no longer applied. Though most cars from the factory come equipped with a similar setup, aftermarket BOVs can hold substantially more boost and expel air more efficiently. As a side perk, they’ll also create the sound most of us typically associate with boosted cars.

What type of BOV you need and how much you should spend ultimately comes down to your project goals. The vast majority of valves are rated at a certain PSI. For example, the HKS Super SQV can tolerate upwards of 40 psi. Considering most factory turbos don’t exceed 20 psi, that’s more than enough even for heavily modified project cars. We’re particular fans of the Super SQV since it doesn’t require spring adjustments for changes in PSI and is heavily focused on preventing boost leaks.

For a solid, trustworthy BOV, expect to spend in the mid-to-upper $200 range. There are cheaper options, but we don’t recommend cheaping out on a component so vital to your engine’s health. Key to note is that your vehicle may not use a blow-off valve system. You may instead need a bypass valve, also commonly referred to as a diverter or recirculating valve. These perform the same function as blow-off valves but do so using much different hardware. Some quick homework (ex. Google/forum searches, etc.) will let you know which your engine requires.

Have any questions regarding blow-off valves, which we recommend for your car or more? Let us know on our Facebook and Twitter pages!