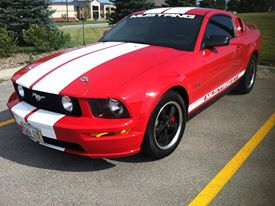 For auto enthusiasts of any sort, a car isn’t just a way from A to B. It’s a lifetime passion. From weekend blasts to daily driving, keeping your vehicle in the best condition possible is a task that requires considerable attention. Keeping your ride in a garage certainly helps but nothing protects quite like a car cover from Covercraft. From UV rays to dust accumulation and everything in-between, there simply isn’t a better way to ensure your finish shines on for years. Feel like winning your very own Covercraft car cover? Simply head to the Motorz Ridez page and submit a few photos of your own ride! Winners are announced each month right here at Motorz.

Few muscle cars have had a lineage anywhere near as long as the Ford Mustang. From the early 1960’s to the all-new pony soon to be unveiled, it is a history that contains many truly special examples of American ingenuity. The pony car owned by this month’s Ridez winner, Mark Korsakas, is no exception. His 2005 Mustang was a result of the classic ‘Stang vs. Camaro rivalry. Mark did his research (including watching a few Motorz episodes) and ended up deciding to go with the Ford. As powerful as his 2005 was from the factory, it didn’t take Mark long to begin adding his own touches. MAC cold air intake, Bama custom tune, strut tower brace, Pypes off road x pipe and Thrush Axle back exhaust all add significant power gains to the already aggressive V8.

In case the more menacing soundtrack didn’t tip you off to the extra power under the hood, there are a few tastefully executed aesthetic touches. Body stripes, quarter window louvers, 17″ Bullitt wheels, hood pins, tinted windows and more add to the potent look of the car. In the future, Mark plans on installing more powerful headers.

Feel like having your own ride featured? For your own chance at winning a Covercraft car cover, head to the Motorz Ridez contest page to learn more and submit your photos! 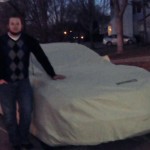 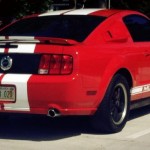 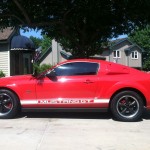 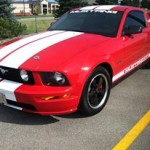