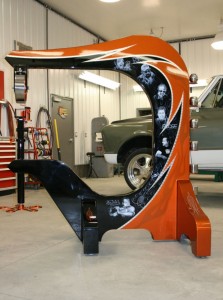 The English Wheel is commonly used in the automotive industry for fabrication and vehicle restoration. They are large pieces of equipment, usually not cheap, and typically not the most attractive thing in a fabricator’s shop. That’s why it’s always a complete joy to see individuals fabricate and pimp out their own English wheels. After all, you spend a ton of time in front of one bending metal around, why not make it look great at the same time?

Chuck Ceccarelli, owner of Inventive Products based out of Mountain Home, ID, decided to “pimp his wheel” in a big way. He bought the wheel and anvils from Metal Ace and hand-built the rest. It took him a couple of years to build in his spare time while running his own business. He made a square tube frame out of 3″ x 3″ box tubing which allowed him to create the main structure.

Then he sheeted it with 1/8″ steel, creating its distinctive shape. “The hard part was welding the seams and smoothing them so it looks like a solid piece of steel,” Chuck told us. “I had Doug Batchelor from Doug’s Designs here in Mountain Home do the paint. I asked that he put pictures of people who have had an effect on the hot rod or racing worlds. On one side we put Von Dutch, Ed Roth, Boyd Codington, Chip Foose, Jessie James, and George Barris. On the other side, Don Garlits, Don Prudhome, Dale Earnhardt, Smokey Yunic, and of course John Force. Each figure head took around eight hours each to paint–don’t ask me what the paint job cost.”

Chuck, all we want to know is this: how much did the paint cost? Just kidding, man–this thing looks great! Thanks for sharing it with the Motorz community. It turned out awesome, and I can only imagine how many hundreds of hours you put into it!