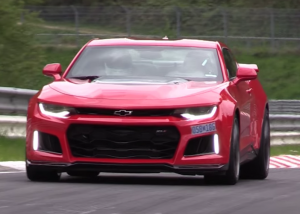 Normally when we write about new car releases, we try and be objective. Research the facts, read up on any initial, unbiased reviews, see how the competition stacks up, and so on. That’s what we planned to do with the 2017 Camaro ZL1. There’s just one slight problem: it’s impossible. Genuinely, utterly impossible. In fact, we’re quickly becoming convinced this just might be the best overall car sold in the states today. Allow us to explain…

For a super sports car to be any good, the bones need to be solid. That’s not a problem for the ZL1. After all, the ‘standard’ 2016 Camaro SS, with it’s ballistic 455 hp, 455 lb-ft. torque 6.2L V8 is pretty much perfect. Basically an ATS-V coupe but with a better engine, it checks all the boxes. Handles like a dream, accelerates like a missile, looks the part and sounds unbelievable. It actually left us feeling a bit bad for Chevrolet. How can you possibly top a nearly flawless car?

The SS’ lovely, delicious V8 is no more. Instead, the ZL1 steals the Z06’s 6.2L supercharged V8. That leads to 640 hp, 640 lb-ft(!) torque, all delivered to the back wheels via a six-speed manual or eight-speed auto. We have no idea what the 0-60 times are, and frankly, we’re scared to know. The 2016 SS does 0-60 in 3.9 seconds. Which means the ZL1 will easily be in the low three-second range. Ever think you were born in the wrong era? Well you’re wrong. Because we’re about to be in one where a factory Camaro, for less than $80k (we assume), can destroy a huge number of very recent Italian supercars.

So it’s Hellcat-who fast, looks like it wants to destroy everything Mustang drivers love and, believe us, those aren’t even close to the best part. Ready to make highly irresponsible financial decisions? Then hook up one helluva sound system, crank it as loud as it will go, and mash the play button below. Fair warning: once you listen to this, there’s probably no going back: