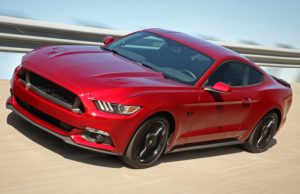 Ever since their debut, the GT350 and GT350R seem to grab headlines on a daily basis. That’s certainly deserving, considering what remarkable sports cars they’re already proving to be. Not looking to drop $50k+? No problem, the Mustang GT 5.0 is alive and well. But, if you’re looking for a full-on sports car, does the GT make the cut, or is it still pony car at heart? Time to start forum wars and end friendships. Let the debate begin….

The latest Mustang brings an entirely new design inside and out, pumped-up 5.0L V8 and more tech than ever. Yet, almost nobody discussed the above when it was first released. Nope. Instead, it was the addition of a limited slip differential (LSD) than grabbed everyone’s attention. Though an LSD is hardly groundbreaking, switching out the live rear axle is a major change for the Mustang, and that caused some mixed reactions. 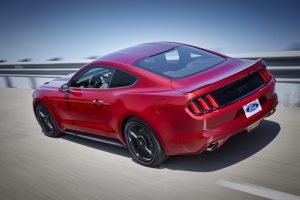 True, a live axle is better for drag strip launches. Unfortunately, it’s worse at just about everything else. Especially twisty, uneven back roads, which were a persistent Mustang Achilles heel. By every modern standard an LSD is preferable and among the base items for a current sports car. Has that addition (along with revised suspension in general) moved the Mustang from muscle car to sports car? In a few ways, absolutely.

The original pony car has always been fun, but it wasn’t until the last two generations that it became very, very good. With the 2016, the recipe of a rev-happy V8, lovely transmission, on-demand oversteer and an LSD sounds closer to E92 M3s than it does previous Mustangs. Take it on a favorite twisty road and you’ll find the chassis balance, turn-in, steering feel and driver confidence all dramatically improved from prior models. 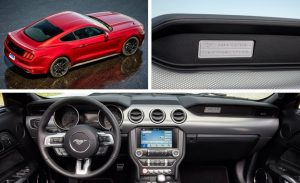 So it’s a sports car, then? Nearly. Very, very nearly. On a backroad pushed to 8/10ths, the GT feels dialed in, sharp and playful. Try a track day where limits approach 10/10ths and some minor but worth mentioning cracks start to show. As good as the chassis and suspension setup is, it’s still too soft. There’s a copious amount of body roll and pitching that shouldn’t be noticeable, especially not in cars spec’d with the Performance Pack. Yet, it makes itself known, leading to corner entry understeer followed by exit oversteer. Fun, but not exactly dynamic.

Having said all of that, the Mustang GT is significantly better at the limit than its earlier brethren. Plus, when it comes to being a drift machine, the GT’s exceptional driver-friendly nature shines through, allowing Ken Block level drifts with entry-level skill. Plus, at anything other than 10/10ths, it’s an absolute gem and will leave a massive smile on your face every time you drive it.

Is the Mustang GT a full-on sports car? No. But it’s no longer a color-by-numbers muscle car, either. Somehow it manages to marry both, achieving near sports car levels of handling with the absurd power and joy of classic muscle. In our humble opinion, that’s a combination that probably won’t be around much longer, and an absolutely buy in our book.

Is the 2016 Mustang GT a muscle car or sports car? Tell us what you think on Facebook and Twitter!