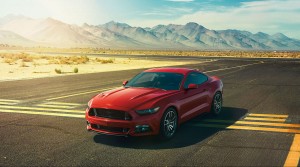 Half a century after first zooming across America’s freeways with the ’65 Mustang, Ford continues to be an innovator in sporty, accessible vehicles with its latest model.

The 2015 Mustang is already receiving raves reviews for its classic yet forward-thinking design. Created for a global rollout, the new model is set to be a standard bearer in stateside aesthetics, assembly and technology. As such, the vehicle has been given top nods by the Detroit Free Press for the North American Car of the Year award.

Features of the 2015 Mustang GT include sporty V8 power and a 2.3L EcoBoost four-cylinder engine, which provides ultimate fuel efficiency while delivering greater power than comparably sized vehicles on the market today. The new model is also being sold at a much lower price than other vehicles of its class. While this has always been a Mustang trait, the 2015 model offers the best combination of technical innovation and efficiency at a reasonably low price.

Both the interior and exterior of Ford’s latest Mustang combine ageless design motifs with tomorrow’s technology. The lights are enhanced across three bars with LEDS, while the driving itself is smoother than ever thanks to the vehicle’s independent rear suspension.

The 2015 Mustang GT marks the latest in a line of efforts by Ford Motor Corp. to offer more fuel-efficient cars. It’s a plan that has encompassed the Dearborn, Mich.-based automaker’s domestic manufacturing and vehicle assembly. The company has converted three of its plants for trucks and SUVs into places for small car production, starting with its Michigan Truck Plant.

In 2012, Ford unveiled its European small cars for U.S. motorists. At the same time, the company upped its production of hybrid vehicles and EcoBoost four-cylinder engines.

Meanwhile, in response to growing concerns within the auto industry over CO2 emissions, Ford of Europe has created ECOnetic, a program geared towards promoting the need for more environmentally sound, fuel-efficient engine technology. To that end, the company has utilized Duratorq TDCi diesel engines in what has proven to be the continent’s lowest-emitting mass-produced automobile: the Ford Fiesta.

The Future is Here

Several years back, the automaker held a challenge where universities competed to design the world’s simplest, strongest, and lightest car for under $7,000. In the end, the students of Aachen University dazzled with their creation of the 2015 Ford Model T.

With 2015 now here, Ford has rolled out its sixth-generation Mustang in Dearborn, New York and Los Angeles, as well as in the overseas epicenters of Barcelona, Shanghai and Sydney. The car will be available in more than 120 countries, with left- and right-hand drive versions made to accommodate particular markets.

In addition to its new colors, the 2015 Mustang differs from prior models with its 1.5-inch wider body, 2.75-inch lower deck lid and 84.5 cubic-feet passenger volume.

Already a hit with test drivers, the 2015 Mustang will be the center of auto enthusiasts’ attention at Detroit’s upcoming North American International Auto Show, where the North American Car of the Year award will be announced on Jan. 12.