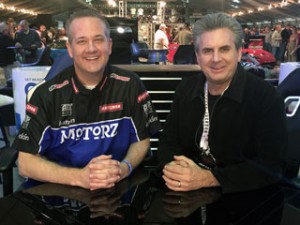 This season of Motorz has covered extensive ground. From modifying Mustangs to transforming Jeeps and even visiting SEMA 2015, it’s been a great adventure. Now, with the series finale, we’re visiting one of the all-time great auto destinations. Ready for the exciting conclusion of Motorz season six? It’s time for 2015 Barrett-Jackson Scottsdale!

In our 84th episode, Chris Duke and Alan Taylor take off and head to Scottsdale, Arizona for the legendary Barrett-Jackson collector car auction.  While there, they met with a number of well-known and loved auto superstars. Mike Brewer & Edd China, hosts of “Wheeler Dealers,” discuss their newly U.S.-bound show. John Hennessey, namesake of Hennessey Performance Engineering, goes into detail over the apocalyptically fast Venom GT. Steve Ling, Ford Marketing Manager, gives an inside look at how the 2016 GT was developed behind closed doors.

Looking for more? Additional guest stars include Paul Brearey, Ford Marketing Manager for enthusiast events; Gary Patterson, VP of Shelby American;  Joe Petralia, from Rare Performance Motorcars and Aaron Hagar from Rat Runners Garage. With conversations like these, you won’t want to miss a single one. Plus, be sure to stay tuned through the end for a tour of the legendary auction as only Chris and Alan can deliver.

Season finales don’t get much better than this packed visit to the world’s greatest collector car auction. Sit back, buckle in and watch Motorz 2015 Barrett-Jackson Scottsdale below!